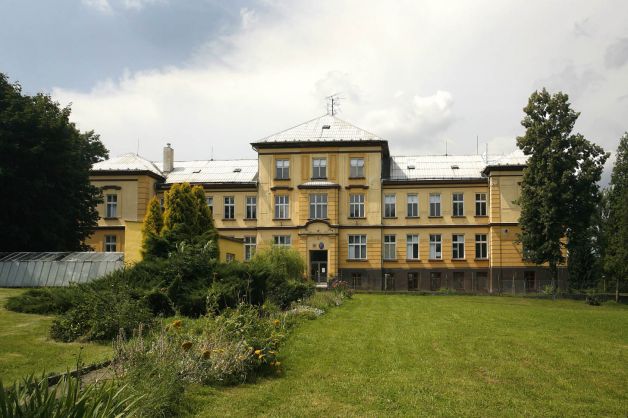 In its long history, the Agricultural school has never failed its mission.

In order to take a brief look at the origin and history of the school, we have to go back to the 19th century.

Let us remember one of the memorable camps of Silesian people on Ostrá Hůrka in 1869, where on behalf of 15 000 participants spoke, among other speakers, Josef František Lhotský, who was a progressive farmer from Hlavnice at Opavsko and others, who rightfully called for the establishment of Czech vocational agricultural school in Silesia for education of farmer's youths - peasant's sons. They were predestined for farming on their mostly Czech farms, called grunts. This request was also added to the resolution on famous Meeting of Silesia people in 1887 in Slavkov at Opava.

Certain compensation was given to farmers of Czech nationality in Silesia but not until 1901, when a six-month agricultural course was opened in Opava. This course was known as School of Kamberský. The school was cancelled in 1907 – because, simply put, there was no room for Czech, although specialized, school in Opava.

By the end of last century it was also called for a practical education of peasant girls, and so in 1902 after overcoming multiple obstacles and financial difficulties, the Philanthropic and Educational Association of Czech Women and Girls in Silesia founded the first Silesian Housewife School in Kateřinky near Opava. The school was taken over by Central Agricultural Association (CAA) in 1907. But even this school was forced out of Kateřinky by German pressure.

Villages Kylešovice, Jaktař, Otice, Háj ve Slezku as well as at that time the only Czech town in Silesia - Klimkovice, all showed interest in the establishment of Agricultural and Housewife schools. The town of Klimkovice not only welcomed the idea but also offered, and later indeed provided, CAA with both moral and material support.

The final decision to establish the Agricultural School in Klimkovice was made in 1908. The construction committee, which had 11 members, was created. Among those 11, there were mayors and farmers from nearby villages (MVDr. R. Resner and the headmaster of the school J. Hradil) under the director František Josef Zíka of Štítina, who was the chair of CAA in Opava and is considered to be the founder of the school.

The building of the school began by laying down the foundation stone on 26th September 1909, and thanks to great dedication and diligence of the Silesian farmers, it was finished in just 11 months.

On 27 October 1910, building was approved, and in only one week - on 3rd November 1910, the classes started. Opening ceremony of Winter's Agricultural School (WAS) was attended by public officials and several hundred farmers on Sunday 14th May 1911.

In 1911, the one-year Housewife school was relocated from Kateřinky to Klimkovice. It remained in Klimkovice until 1949, when all housewives schools were cancelled nationwide. It is necessary to point out, that in 1911 another major event took place – the railway connection between Klimkovice and Svinov was opened and played significant role in development of both schools.

The first headmaster was Olga Hermanová – Solfronková (1911 – 1928), followed by Antonie Rosolová (1928 – 1938) and the last headmaster was Anna Straková (1945 – 1949). Apart from teaching (596 graduates), the Housewife school did a lot of work in the countryside by numerous lectures and courses for women and girls. This helpful and educational work was only interrupted by the First World War and the Second World War.

Among the graduates of the Agricultural school, we could find the writer Jarmila Glazarová (1917 – 1934). According to her words, she spent the most beautiful years of her life in Klimkovice. Our town became the scene of two novels - Roky v Kruhu and Vlčí jáma (this piece was also filmed with Jana Brejchová starring).

The Winter's Agricultural School had originally one winter subject (from 15th of October to 15th of April), where pupils over the age of 15 were, besides specialized theoretical and practical subjects, also trained in woodwork (wheelwright), saddle-making and basketry. The first headmaster of WAS was Ignác Frgala (1909 – 1920). From 1914 to 1918 the education was interrupted and military hospital was set in the school.

In 1921, the school was renamed to State Vocational Agricultural School with 2 winter terms. It also passed from CAA to the administration of the Ministry of Agriculture.

In 1929, the year of the school’s 20th anniversary, Alumnus Association was established by Jan Stareček. After the takeover of the school by the state and throughout the First Republic, this school was one of the best equipped, and so it became the center of agricultural progress for the area, especially after the establishment of the Agricultural advisory in 1932. The headmaster at the time was František Krikshofer.

In 1934 the school celebrated its 25th anniversary with the Agricultural exhibition and graduates meeting of both schools with area-wide public participation - more than 500 participants from Frýdecko, Bílovecko, Opavsko and Hlučínsko. The headmaster at that time was Ing. Alois Doležel (1928 – 1938).

In the period of 1938-1945 both of the schools in Klimkovice were cancelled, and the DEUTSCHE LANDWIRTSCHAFTLICHE SCHULE was established. Since 1944, the building was used as military hospital. The interior and the equipment of the school, including pedagogical documentation and school archives were almost completely destroyed by the war events.

In 1945, the World War II ended and the Agricultural and the Housewife schools were opened with great contribution from headmasters Ing. Karel Běhounek and Anna Straková (1945 -49). The classes in both schools started as soon as 1945.

Afterwards, every decade since the foundation of the school,  corresponding anniversaries were commemorated by meeting of former employees and graduates, by exhibitions of fruit and vegetables and by others cultural events - such as exhibition of paintings by Helena Salichová.

In 1999, the School's 90th anniversary, and also the Vocational School's 30th anniversary were commemorated by a two-day program and Open Day. Among the most significant participants, we could find Mr. František Klein from Stará Ves at Bílovec, who graduated from the Winter's Agricultural School in 1928, as well as two 84 year-old 1935’s graduates from the Housewife School. The headmaster at the time was Ing. Vladimír Hrabal (1991 – 2002).

In 2002, the merge of local Horticultural and Agricultural schools took place. The headmaster of the newly formed school was Ing. Jiří Bárta (2002 – 2009).

Year 2005 brought last graduates from agricultural vocational programs. The school was beginning to specialize in horticultural and food industries. In 2006 the school was renamed to the High school vocational and with special education, Klimkovice, contributory organization.

In the end, we certainly can, from this brief list of the most important events of the history of agricultural education in Klimkovice, say that almost for its entire duration the agricultural school has never, in its long history, failed its mission - TO PROVIDE WORKERS WITH FUNDAMENTAL SKILLS necessary for our agriculture industry, and we believe that this heritage will continue to live on in the present-day with non-agricultural apprentices as well.