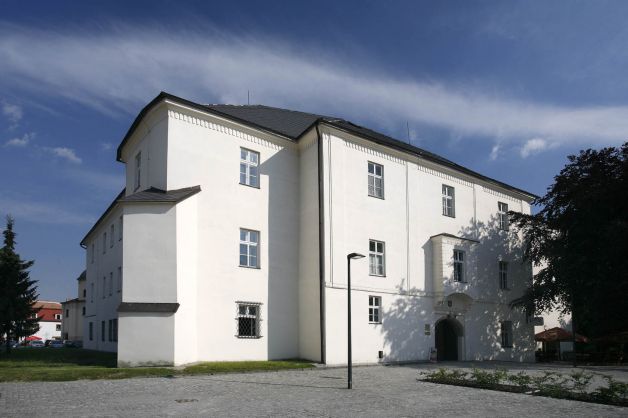 The chateau used to be one floor and four corner turrets more spectacular. But it is still fully used from the cellar to the top. Do you know what the elevated passageway was used for and where the secret underground corridor led to?

The chateau was built between the years 1578 - 1579 in a Renaissance style. Today, it is a two-story, square-shaped, four-wing, brick building with enclosed courtyard. Until 1854, when the castle was hit by a devastating fire, it used to look far more spectacularly. It was one floor higher and paraded with 4 turrets and an artistic facade. The whole building had 67 rooms. The second time the castle burned, it burned down completely in liberation battles on 1st May 1945. For that reason, only a part of the splendor remained - the monumental staircase in the Romanesque style with Tuscan columns and a stone bowling railing. On the first floor, two stone portals with rich ornamentation have survived. There is also a rarity in the form of the elevated passageway connecting the chateau with the church; the passage was used by the lords to go to the church choir loft. Another unique attraction is a sandstone horse bench, which is located in the entrance to the courtyard of the chateau and which helped the noblewomen get on their horses. In the chateau's underground, we can find the secret passageway approximately 900 meters long, which probably served as an escape route in times of danger. Between the years 1946 and 1954, the Castle garden was changed into the City park of Petr Bezruč. The Park gained its after present appearance by its reconstruction in 1991.