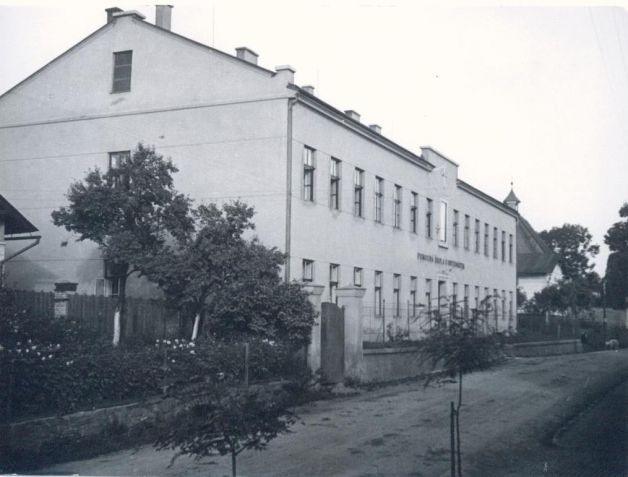 The Monastery of Dominikans Sisters

Nowadays the "monastic school" building is one of the most historically significant objects in the city and the best part of the Elementary Art School in Klimkovice (EAS) is situated there. In ground-level wing of the building, we can find premises of the municipal public library.

Efforts to strengthen the Czech national identity in the increasingly pervasive influence of the continuing Germanisation of Bohemia, Moravia and Silesia, but also the efforts to uplift Klimkovice's residents culturally, economically and socially, were the primary task of municipality and the town council during second half of 19th and early 20th century, that means before the outbreak of World War II.

Between 1876-1877 (after many years of efforts prior to this period), the Klimkovice Town Council together with the support of Czech national awareness indeed succeeded in enforcing the construction of new building of Czech Elementary school. However, they encountered much greater obstacles and disagreement in efforts to establish other follow-up Czech schools in the town. Fortunately, one of our town’s natives, P. Angelus (Ludvík) Lubojacký, (former prior of the Dominicans in Prague and the founder of the Convent of Dominicans sisters in Řepčín at Olomouc) boldly volunteered to accomplish this goal. He supported the idea of establishing the Religious Czech Grammar school for boys in Klimkovice.  In the period 1892 to 1893, he had, at his own expense, the project for building prepared. The building was supposed to be built on the premises near local cemetery with the Holy Trinity Church. For the construction of the new school in Klimkovice, a special financial company was established. The company was founded by the architect and builder Emil Hanke of Frýdek, and by the Klimkovice native "architectural trainee" Ludvík Kunz, who later became the mayor of the town. School was opened quite early - in 1894, unfortunately it was operational for two years only. The authorities hadn't granted the school the privilege of teaching Czech language, and so three years after its opening the school was dissolved.

In 1896, by the decision of the Archbishop of Olomouc, Dr. Theodor Kohn the girls' school and boarding facilities were set up in the building of the private school, the Archbishop entrusted the control of the school to the Dominican Sisters Order, which was based in Řepčín at Olomouc. It was the very first monastic school in Silesia that has provided the girls, who had already finished the Elementary school, with further extended family education. At that time the girls were taught piano playing, sewing and embroidery skills as well as cooking and teaching. The School graduates had the opportunity of careers as crafts teachers on elementary schools or as guardians in nursery schools. (Among the most significant graduates of the school, we can find an academic painter Helena Salichová.)

Since 1916, the relocated Orphan shelter, which was under the administration of the Orphan association of Klimkovice, occupied part of the building. Operation of the monastic school was cancelled in the early postwar days of 1918. Since 1st October 1918, the Dominicans Sisters provided for the retarded children and children with mental defects, and there were many such children in the new republic after the World War.

In the period of the First Republic, the purpose of the school was changing gradually, up until it became a special school. Before 1938, the school was attended by about sixty students from the whole sub-regions of Klimkovice, Bílovec, Opava, Frýdek-Místek, Ostrava and Těšín, and sporadically also from more distant areas of Moravia. The intention and mission of the school was to prepare children for life with appropriate application of their reduced mental and physical abilities.

After the German occupation and the forming of the Sudetenland in 1938, the already good-working and economically secured special school and its functioning were suspended. The school building was seized by the Germans and the building was used for the activities of the German youth organization Landjahrjugend. This situation continued throughout the war, that is, for seven years. After the liberation in 1945, several classes of lower grades of elementary school were relocated to the building temporarily. School club and later on a school canteen, where lunch was served to the school's children from all over the town, were set up on the ground floor. To ensure the functioning of the school there was separate housekeeper's (janitor's) apartment established in the building. Since 1948, the building, including the grounds, became the property of the Czechoslovakia and the school's operation is under the administration of local People's committee. And so in the early fifties of the last century, several rooms on the first floor were used for gathering of collections of at that time newly-created Museum of National History in Klimkovice, which was more known by the name of its founder, Jakub Turek, as “Turkovo Museum”. Later, but not before 1980, the entire exhibition was moved to the chateau and became part of the Museum of National History of Novojičínsko.

In the autumn of 1953, the monastery building provided rooms for the relocated, recently established Music School in Klimkovice, which functioned in unsuitable conditions in the local chateau. Therefore, the Music School gained more spacious and permanent premises. Later on, the Musical School in Klimkovice was renamed to the People's School of Art (PSA). It occupied rooms of the right wing on the first floor. In one of the larger rooms of the left section of the building, the Ceremonial room of local (later Municipal) People's Committee was set up. On the ground floor there were two rooms reserved for the Aquarists hobby club, which was part of the mother organization of breeders of small animals, but later became independent. Some of the lower grade classes of the nine-year Elementary school (a total of 4 classes), school canteen and school club remained in the building up until 1979. Also the Ceremonial room of Municipal People's Committee remained there until the second half of 1985 and then was relocated to newly reconstructed first floor of the chateau.

At the end of the eighties of the twentieth century, the building of the former monastery underwent an extensive reconstruction. The roof and facade were repaired and at the rear part of the former courtyard the new boiler room, (with solid fuel boiler) was built to provide heat for the entire building. There was also reconstruction of interior, both on the ground and first floor. Left section of the ground floor was reconstructed, and the premises of public library with modern equipment of study room and reading room were extensively enlarged. Premises reserved for the activity of all the study programs of Elementary Art School, were significantly expanded. Cancellation of the janitor's apartment and rooms used by Aquarists hobby club on the ground floor allowed establishing of changing rooms for the Art school students, which resulted in increasing the number of classrooms of the Music program and setting up the staff room, principal's office, administration office and school management office in appropriate rooms. By joining the small rooms on the first floor, the large and small concert hall was created. Ballet hall and classroom for theater and drama program is newly established and equipped. In the early 90s of the 20th century, the building was the subject of very lengthy restitution proceedings resulting in its return back to the property of the Dominican Sisters Order, but only after lengthy delays in 2000. Immediately afterwards, the entire property was sold off back into state ownership, through the District Office and the Education Office in Nový Jičín. Soon after these authorities were dissolved and their competences were transferred to the newly established autonomous authorities of each region (in our case to Regional Office of Moravskoslezský Region with administrative seat in Ostrava), then the ownership passed into the property of Moravskoslezský Region. The new owner, who is also the founder of the Elementary Art School in Klimkovice, (EAS), has run the school, which already gained its own independent legal status as an contributory organization in 1995, through the management and school council.

Nowadays the "monastic school" building is one of the most historically significant objects in the city and the best part of the Elementary Art School in Klimkovice (EAS) is situated there. In ground-level wing of the building, we can find premises of the municipal public library. The library has a modern interior and is well equipped with computer technology including two PC workstations with public Internet access. The library also has small area designated as a study room for the visitors.

Compiled by: Ing. Jiří Pillich, the chronicler of the town of Klimkovice, in Klimkovice, April 2008

excerpts from archive materials and the chronicle of Klimkovice, documents of the former chroniclers A.Výtisk (typescript), A. Hub (notes) and A. Hub: Klimkovice (1994)