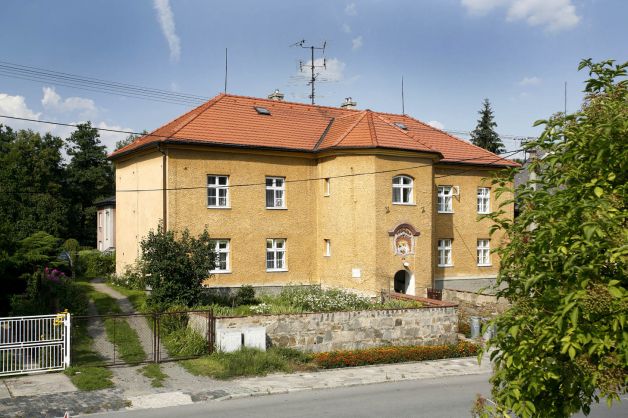 Historically significant building of cross layout has always served the needy. Today it is owned by the city and the interior was converted into residential units.

Historically, the building is one of the most significant yet well-preserved buildings in the city. It was built only a few dozen meters from the ancient city marketplace in today's 28. října street. People from Klimkovice and its vicinity still, up until today, call the building by its original historical purpose of "feudal hospital".

The construction was carried out at a time when the Klimkovice estate owner Josef Maria Adam Count Wilczek (1700 - 1777), who in addition to his significant political and military status in office of the imperial court in Vienna, inherited Klimkovice estate from his father Jindřich Vilém Count Wilczek and also took care of the increase of capital of Wilczek princely family fund, founded by his father, to the amount of 29,350 gold pieces. And from this very fund, he and his wife Marie Frederika Count from Oettingen-Spilberk had the above-mentioned building, in which they founded the feudal hospital (a kind of municipal hospital) and the poorhouse, built in Klimkovice in 1761. Shortly before, the city had been severely affected by an extensive outbreak of plague, which killed almost quarter of its population. The victims have left hovels full of orphans, who were abandoned, infirm and sick. These people found themselves in a so-called “day-to-day” situation without any provisions. Actually, for these people in their burdensome and difficult life situation, the only real chance of survival was the hospital with the poorhouse. The architecture of the two-story building with simple gabled roof is extraordinarily important not only for the cardinality of its external facade, which has remained unchanged for centuries, but also for the less obvious rare layout, which when looking from above looks like a cross, expressing the sense and the original purpose of this structure. The facade of the entrance is to this day decorated with coat-of-arms of both aristocratic families - the founders of this hospital, Wilczek and Oetting with stucco facade inscription: "JOSEPH DE WILCZEK, M. FRED. COM. DE OETTING 1761".

Soon after the building was completed and commissioned, its intended purpose was changed. In the countries of the Austro-Hungarian Empire, there was Compulsory Education Law legitimized in 1762. That’s why there were rooms allocated to “parochial school” as was required by the law. The school had two classes of students. Its functioning lasted until the year 1869 under the tutelage of a local church and parish office. The school was conducted in extremely complicated and crowded conditions for a long time up until 1877. Since then, it became to serve the role of an elementary school. In both of the classes, these subjects were taught: religious education, reading and language (Czech since 1872, the other compulsory language was German). The building survived both world wars in a safe and almost intact manner. In the second half of the 20th century, the building was reconstructed and the interior was completely rearranged to provide several small housing units. Rental apartments were established there, and in 1990 the ownership was transferred to the town of Klimkovice, which owns this historically valuable building to this day.

Compiled by: Ing. Jiří Pillich - the chronicler of the town, May 2011