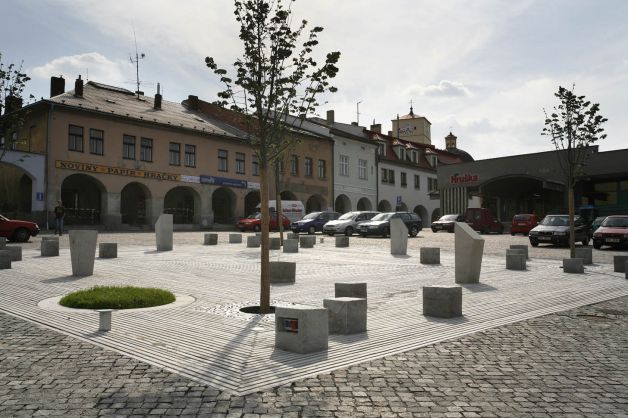 It was the pride and a sign of wealth of the town and its inhabitants. Cruel fate caused, that this significant is nothing but an imprint in the pavement on the square and a torso of a well.

If one goes back in time and follows the footsteps of the existence of a brewery in the town of Klimkovice, one will be forced to note (with only a small satisfaction), that not much is known about the history of the brewery. On the one hand, the existence of the brewery in the middle of old town market place is historically proven without the slightest doubt, but on the other hand, nothing has been preserved from an era in which the townspeople of Klimkovice brewed the beer. No information or documents about the brewery or the beer are left in folk tales or traditions.

At the time of its founding in the 2nd half of the 14th century, Klimkovice were given important civic rights by its owner. One of these rights was the so-called "right to brew beer." However, this right belonged only to the very rich burghers. In 1545, the owner of the town at the time, Hynek Bruntálský I. (the second husband of Joan of Bítov), gave the "right of wine tavern" to the citizens. The next owner called Hynek II. of Vrbno (in Klimkovice from 1560 to 1573) greatly helped to achieve unprecedented economic development by granting other privileges to the citizens. By his letter from 19th July 1564 written at the old chateau of Klimkovice, he freed citizens from compulsory labour with the exception of 6 days a year meant for harrowing and mowing. However, this freedom came at a cost - a permanent annual fee, which was set to 1 gold piece for the owners of brewing right and ½ gold piece for the artisans. In the same year, on 24th of December, the owners of the brewery right were given permission to build an independent brewery, which was built in the middle of the medieval square. In Exchange for an annual fee of 6 gr. from each batch of beer, maintenance and repairs were to be carried out in the brewery. In the next privilege of 25 April 1565, the same feudal lord demanded a fee of 30 gr. per one gauge of malt instead of collecting the malt itself. Originally, it was envisioned that malt extract will be used to produce beer in the brewery of the nobility. However, this intention of the owners did not realize in practice.

Therefore, there is no doubt that the city brewery in Klimkovice provided the feudal owners with considerable financial resources on an annual basis, and that brewing was very profitable business for burghers, taverns and inns across the whole estate. Thanks to his skills and knowledge, Hynek II. eventually made it to the position of President of the Principality of Opava.

The beer from the Burgess Brewery in Klimkovice was being delivered to all corners of the estate. Excluding the town of Klimkovice itself, the estate consisted of 19 serfs villages (Lagnov, Martinov, the court Hýlov, Vřesina, Polanka, Svinov, Poruba, Třebovice, Krásné Pole, Děhylov, Bravantice, Studénka, Jistebník, Dobroslavice, Velká Polom, Čavisov etc.). The brewery had no cellars, in which the finished batch of beer could have been stored in a cool environment. However, it seems that the deep cellars under the houses of the townspeople living in the square served well in this regard. (Some of them are still in fairly decent shaped even today.) When Klimkovice were held by the Wilczek Family, the economic and business development of the town progressed well, with the exception of war years and the plague epidemic that hit the entire territory of Silesia, especially in the 18th century. But the greatest and most comprehensive tragedy for the town and its inhabitants were undoubtedly two devastating fires. The first one occurred during the night of 29th to 30th August 1848. It seized the city centre and completely destroyed 97 wooden houses and many other buildings. The fire also, and to the ground, burnt down the middle of the square and the town’s brewery. After these tragic events, the lords and owners of the Wilczek Family were not interested in restoring the brewery as they moved to a nearby chateau located in nearby Poruba. They only took care of repairs on the heavily damaged building of the chateau, and soon afterwards moved their entire clan to a chateau called Kreuzenstein in Lower Austria. In the second half of the 19th century, a new, brick building called “Buduněk” was built at the same place in the middle of the square, where the brewery stood until the fire in 1848. That building later served as the seat of city government. To this day, only well-preserved medieval stone well that used to be used by our ancestors as a water source for beer brewing stands as a monument to the brewery and as a mute witness of its history.

According to unverified information, the beer was being brewed in the city for a few decades after 1848, up to 1892. However, it was not meant for mass production, but only for domestic use.

Compiled by: Ing. Jiří Pillich, the chronicler of the town, Klimkovice, August 2008