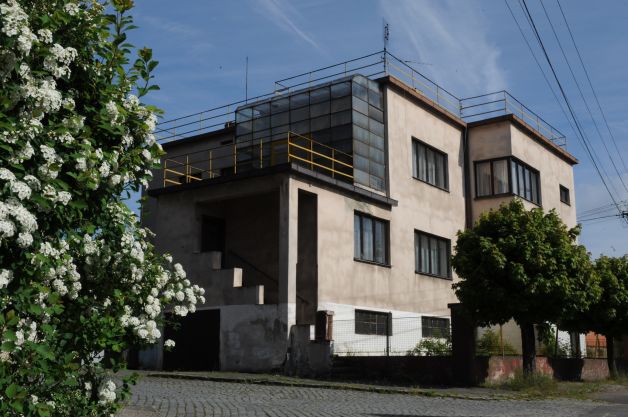 The House of MUDr. Josef Podivínský

“The House of Jarmila Glazarová” is historically higher than any other attraction-drawing building in the vicinity – i.e. modern villas of the first half of 20th century.

The construction of the house was carried out in 1931 on the land bought from the Mr. Pavlíček, who had used it for gardening. Grounds were acquired by the local general practitioner Dr. Josef Podivínský. He had the building built in the modern classicism style and he had his medical office set on the ground floor. The building project architect was his son-in-law Hublík from Olomouc. In the first half of the thirties of last century, the large building and its garden became the scene of the debut novel Roky v kruhu by Jarmila Glazarová. In 1926, Glazarová got married for a second time to Dr. Podivínský, who was much older. She later stated that she had spent the happiest period of her life in that house. The novel was based on entries of the novelist diary and became a chronicle of her life in marriage with Dr. Podivínský, who suddenly died due to stroke in 1934. Based on the last will, the house became a property of the doctor's daughter from his first marriage MUDr. Blanka Podivínská. The house was rented as a workplace for Klimkovice’s general practitioners, and later it was sold.

Today, the house with the garden is owned by a private owner.

In the early thirties of the last century, Mr. Václav Štěpánek from Klimkovice, influential Silesian cattle dealer, had modern multi-storey residential villa. It was built on the land of former gardening area as well. The construction was carried out following the project created by master builder K. Gajovský from Ostrava. Štěpánek lived there with his family.

Residential real estate including the adjacent garden is currently in private property.

Local tailor master František Perník from Klimkovice had the villa build on his land next to the Rakovec creek. The house was built in extremely unorthodox architectural style of modern conception of the First Republic's family living. Blueprints for this building were also created by the master builder K. Gajovský from Ostrava. By the time the war frontlines reached and liberated the town from fascist occupation, the house was used as the headquarters of RA (Red Army).

Today, the house is owned by private owner.

by Ing. Jiří Pillich – the chronicler of the town, September 2011