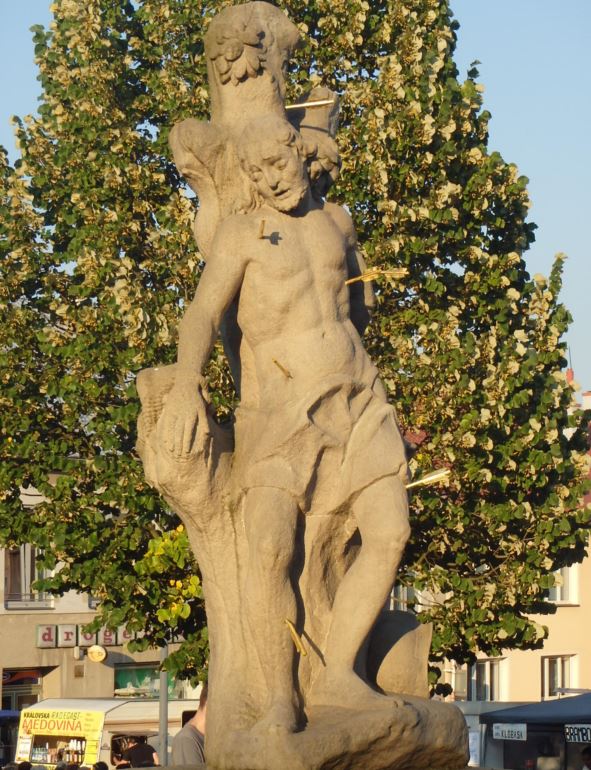 In the middle ages, we had a brewery in the middle of the square, which was not restored after the fire in 1848. Instead, in its place a new building was built. Local people as well as people from afar knew it as "buduněk". The building was, among other things, the seat of town’s council, and the centre of municipal administration. And right here, before the main entrance to Town’s Hall, two statues on stone pedestals used to stand. The one on the right was the statue of Our Lady of Sorrows, and the one on the left of the stairs was the statue of St. Sebastian. Our forefathers showed extraordinary respect and gratitude to this statue for centuries. But for what reason? During the Prussian-Austrian war, the Prussian troops pillaged and looted the villages and towns across the Silesian Opava. An extremely strong plague has gripped the town of Klimkovice. From 1758 to the middle of the year 1759, more than a third of the entire population was killed by the plague. And the people had no way to stop the deadly plague from spreading. Due to the helplessness, burghers and common people gathered in order to pray for stopping the plague. Special services were performed in devotion to St. Sebastian, who according to legends saved many towns across Europe and in our country from complete extinction.

The prayers of residents of Klimkovice were also heard in these difficult times. When the disease finally stopped spreading, they built a stone statue of the saint using their modest means in 1760. The statue was put on a high prismatic pedestal and perhaps moved to our ancient market place. At the statue’s stand, people lit candles, torches and kerosene lamps. To demonstrate a thanksgiving to the saints, prayers and worships were held at every opportunity. Parades and processions were directed to market aquare of Klimkovice for years, and not only from the city itself, but also from many villages and settlements from the area, even in the first half of last century. St. Sebastian is generally regarded as a protector against the plague, is the patron of soldiers and war invalids, potters, tanners, and gardeners. He is a martyr-saint, who protected the persecuted Christians in Rome during the reign of Emperor Diocletian. According to the emperor's orders, he should have been killed by arrows while being tied to a wooden stake. However, he somehow miraculously survived this torture, and his Christian followers managed to save him. Later however, the emperor had him whipped and beaten to death using iron crowbars. Basilica of St. Stephen stand at the place where the martyr was buried in today’s Rome. In 680, he became universally recognized as the protector against the spread of this disease. People at the religious services told him their resolutions on a daily basis: ... "God, give us the spirit of bravery, so that we listen to you rather than to other people, just like the martyr Saint Sebastian did." ... and he was given the credit for ending the spreading of this disease.

Based on the chronicle and historical documents of Klimkovice, compiled by: