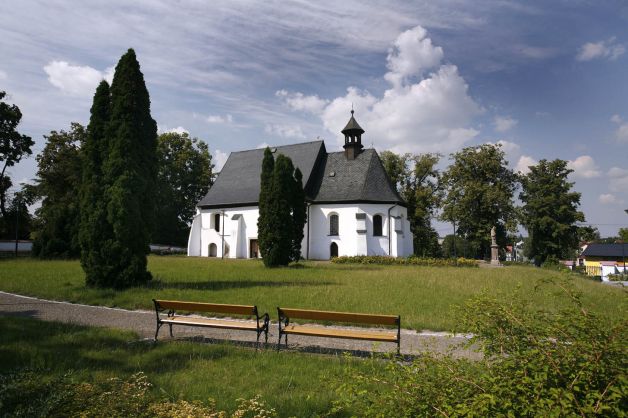 The oldest building in town is now completely renovated and is used for exhibitions, concerts and other cultural activities.

This medieval church is the oldest preserved building in the town. The beginnings of its existence date back to the first half of the 16th century, time strongly influenced by religious reformation. At that time the church administration alternated between the Catholic and evangelical (Protestant) depending on what religion the ruling lords were. The relatively long period of religious disputes was accompanied by the principle: „… the owner of the estate owns the people, and dictates the religion and the language …“.

By marrying the noble lady Johanka of Bítov in 1513, her husband Hynek I (Bruntálský) from Vrbno gained the whole Klimkovice estate, which in addition to the town of Klimkovce with fortress and water gate in Vřesino, included the villages of Lagnov, Martinov, Svinov and Polanka. At that time, the local parish and the ancestral wooden parish Church of St. Catherine were occupied by evangelical pastor, and so the new lord had the new rather small Most Holy Trinity Church built in 1525-1529. It was built for the supporters of Catholic belief. The church was built in early Gothic style on the hill towering west of the town center. Unfortunately no details of its construction, historical or any other written documents are available. However, according to the unsubstantiated reports,  it seems quite trustworthy that the church was, due to these religious reforms, in alternating possession of Catholics and Protestants for many years especially in the 17th and 18 century. It was not until the end of this era that the stable and more permanent religious reconciliation occurred. In 1681, the owners of Klimkovice estate - count House Wilczek changed their religion and accepted the Catholic faith (with simultaneous germanisation of the House). The Church of St. Catherine had Catholic priest installed again. On the other hand, the small Most Holy Trinity Church became more permanent seat of diminishing Protestant's supporters. This fact is confirmed by the rooster sign on the ridge of the church's roof. The rooster sign has been preserved to this day even through the reconstruction in the 18th century. In 1766, the burial ground from the town's center was moved to the outside of the church. Later on, it transformed into the cemetery. One of the reasons for the relocation of the burial ground was probably the great outbreak of plague that struck the city during the Silesian wars (1758-1759). It had resulted in the death of at least 381 people of about a thousand residents of the town. And so the Most Holy Trinity Church became the church with graveyard for the next 207 years. According to unverified reports the church has never been ordained in its entire existence, and it also has never been recorded as the property of the Christian Church. Its repair, maintenance, reconstruction and restoration have always been taken care of by either owners of the city themselves, or later on, the parish office administration and municipal administration of the time. Extensive repairs to the building were done during the second half of the 18th century, then in 1805, also in the last decade of the 19th century and finally in 1934. Simultaneously with the repairs of the church the necessary repairs and maintenance of the cemetery were done as well. In the second half of the 20th century, the building and its surroundings were more and more neglected. The only thing really kept operational was the cemetery. The church was deteriorating and so functional only partially, because of its damaged and leaking roof. Also the capacity of the cemetery was no longer sufficient, and there were many graves without maintenance. In 1973, in relation to the establishment of new town cemetery in Klimkovice, the burials in this "old cemetery" were ceased and the cemetery was decommissioned. For the next 15 years, the cemetery was not used at all ("time decay" has begun).

Access to the cemetery has been banned for public safety.

From sources about history of Klimkovice

compiled by Ing. Jiří Pillich – the chronicler of the town