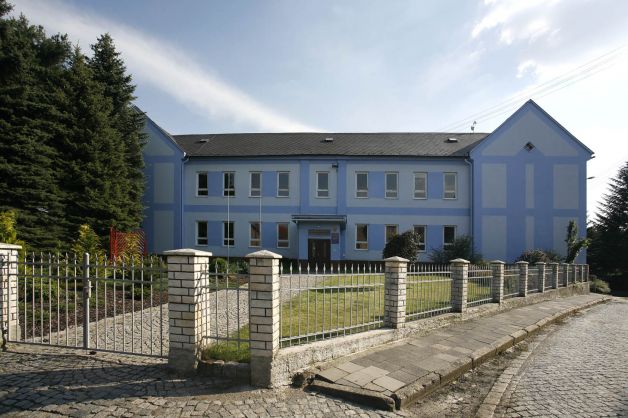 The urgency of the need for a new school building in Klimkovice was recognized even by the Imperial-Royal Provincial School Board in Opava which following an inspection carried out in May 1875 invited the mayor Klimkovice by letter of 7th June of the same year to arrange the necessary preparations for constructing a new elementary school immediately. The construction was in effect commenced in the spring of 1876. It was implemented based on a project by Ing. Eberhard Czermak, and under the direction of master builder František Jureček from Mor. Ostrava the building was completed in 1877 with the costs of 16.400 Austro-Hungarian guldens.

It is interesting that … “into the foundation stone, a memorial document was placed in which by an erroneous conjecture the founder of Klimkovice is considered Ottokar II of Bohemia…” (see kronika města Klimkovic Díl I str. 47 – Chronicle of the Municipality of Klimkovice, Volume I p. 47).

Allowing for the then situation, it was a modern school with five spacious classrooms, teachers’ offices, director’s and school janitor’s flats. Its construction approval took place on 16.08.1877 and the building was ceremoniously opened on Sunday 15th September 1877. The first director of the school was Josef Hradil, a head teacher from Klimkovice. The number of pupils grew higher year after year and in 1885, as many as 427 children attended the five classes of the Czech primary school (205 boys and 222 girls).

Thus from 1902, there was an increasingly intensified need to establish a Czech secondary modern school in Klimkovice in addition to the primary school, which was particularly favoured not only by the director of the primary school Hradil himself, but the municipal board and council promoted the same idea, too. The effort was successfully rounded off only with the decision by the Provincial School Board of 19th March 1913, however, with the result that the Czech secondary modern school could be open only as a one-class institution solely for boys, with obligatory German language. For this reason, in 1914 two classes were added to the south side of the building of the primary school and at the same time, the director’s flat was abandoned. After 1918, when the secondary modern school in Klimkovice was being attended by 170 pupils from 28 municipalities in six classes, the school was already coeducational.

In rather cramped and with time and even hygienically unsuitable conditions, the building served as one of several places relocated within the municipality with a view to ensuring compulsory primary school education until 1979, when a new primary school with eighteen classes was opened in Klimkovice on Vřesinská street. The historic building of the original Czech primary and secondary modern school was further used after building alteration in a following period for the purposes of secondary agricultural education. Until 2010 it housed the Secondary Vocational Special School and Professional School with the study fields of horticulture and gastronomy.

In September 2011 the municipality of Klimkovice took over the school building into its property. Currently, since 2012, the building has been a seat of the leisure time centre (CVČ) Mosaic Klimkovice, there is also a station of the municipal police, and several rooms serve for year-round operation of the private Secondary Business School.

Elaborated:
based on a document about history of education in Klimkovice
October 2013 – Ing. J. Pillich – municipal chronicler