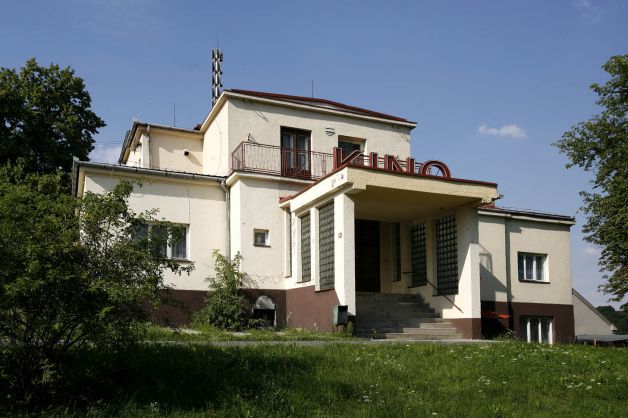 The building was originally built as the Worker's House in 1932; today it's used for social activities of the residents of Klimkovice, mostly as the cinema called Panorama.

Since the very beginning of worker's associations, the main focus of the members was to have, among other ideas, own residence in the form of a Worker's house. However, accomplishment of this goal took several decades. Until then, the members of worker's associations had their meetings mostly in rented premises, mainly in the city hotel (house No. 66, 67) at the top of the ancient "klimkovický rynek". Public exercises of Workers' Gymnastics Club (WGC) members mostly took place in the hall of "Na špici" inn (later rebuilt into the Cultural house) or in the wild "under the open sky".

In 1932, the building of Worker's house, which was situated on a hill in part of the town called "Fifejdy", was, after all, finished with direct contribution from the members of WGC and Social Democratic Party in the city, who voluntarily worked on the construction site for thousands of hours. Worker's associations thus finally obtained their desired residence. That's why, historically, the building is closely linked to the development of worker's associations during the period of the First Czechoslovak Republic. It is therefore noteworthy to mention some general basic fact about the origin of this movement and the establishment of worker's associations in the town.

Establishment of workers' gymnastics clubs: In the last three decades of the 19th century, considerable development of organized worker's movement began along with founding of industries in Ostrava region, as was the case in other areas with the growing industrial production. The Social Democratic Party of Austria with its autonomous part - the Social Democratic Party of Czechoslovakia was established. Along with that their supporting associations - mostly co-operative, educational, training and socio-cultural, were created. The first one in Klimkovice, was the Association of Catholic’s Journeymen (established in 1873) and the Worker’s Educational Association "Pokrok" ("Progress"), which was established on 26th December 1906. In these supporting associations, we could see gradual forming of their independent gymnastic unions (following the model of already successful Sokol). The main reason for the separation of worker's associations was refusal of the policy of the Czech bourgeois parties by Social-Democratic deputies representing Czech lands in the Imperial Council. This incited a great rift of opinions and also great resistance throughout the former Czech national society. Czech Sokol Organization, which considered the opinions of worker's representatives as betrayal of Czech national cause, came out sharply against the opinions of social democrats. And so, in 1897, members of the Czechoslovak Social Democratic Party and their supporters left Sokol organization. Soon afterwards, the first Workers' Gymnastics Clubs (WGC) began to form in Bohemia and later on in Moravia as well. The very first one, called "mother WGC," was founded on 22nd August 1897 during Prague's Typographic discussion.

The base (nationwide) organization of the newly emerging worker's associations - the so-called Union of Workers' Gymnastics Clubs (UWGC) was established by the 1st Congress of WGC in 1903. The elected chair of UWGC was František Hummelhan. The Union held public exercises and following the example of Sokol, it presented itself to the public by mass gymnastic performances. Exercises were performed in accordance with Tyrš’s gymnastic scheme. The sport itself was rejected in WGC, but games, sequential and floor exercises were recommended. However, worker's educational association Pokrok ("Progress"), purposefully sought to have enough of young people in his membership, that's why as part of its activities it created an independent gymnastic branch. Therefore within the frame of this branch, the local autonomous worker's gymnastic club (WGC Klimkovice) was established in 1912. The newly formed Gymnastics Club mostly attracted Sokol’s working class youth to their ranks, who significantly affected the development of gymnastic, social but also cultural activities in our town. This trend was becoming more and more clear in the second half of the nineteen twenties, especially in amateur theatre, where, within the WGC an extremely successful theatrical scene, which managed to compete with both of the already established amateur theatres in the town, was created. (Sokol, Orel Movement)

Key milestones in the history of the Worker's House in Klimkovice:

From the initiative of members and supporters of WGC and with full financial backing and guarantees, the construction of new building, built on “greenfield”, was successfully completed in 1932. The construction was done based on the project of local architect Ing. Pavel Dubina (*1888). It was the property of the Social Democratic Party and the WGC Klimkovice and was used mainly for activities of worker's associations of Klimmovice. The building contained hall with a stage, clubrooms and a restaurant. The hall was used for holding various social and cultural events; there was also a theater and a place for the public exercise of WGC members.

In the period 1938 to 1945: During the German occupation and during the Second World War, all organizations, associations and political parties were dissolved and their activity was forbidden by the German occupation administration. WGC was of course not an exception. At that time the building did not serve its purpose. Germans renamed it to "Turnhalle" (Gymnasium) and it could be used only under the supervision of the German town council.

- Between the years 1945-1948: After the end of World War II in 1945, there was a quick recovery of activities of worker's gymnastics and WGC Klimkovice. The Worker's house, which was under the administration of WGC, was fully used once more. The hall was used again for the amateur theatre performances and group exercising as well as for other social events. The funds provided by the capital city of Prague were used to equip the Worker's house with new tables and chairs.

- Until 1948: After the political coup in February 1948, the activity of WGC was suspended in the following years. The suspension was related to establishment of so-called "unified physical education" throughout the former Czechoslovakia. The organization of physical education and sport, and the ownership of all the equipment were transferred into the proprietorship of TJ Sokol Klimkovice, which became the only gymnastic organization in town.

- Year 1952: The bodies of the town government of Klimkovice discussed and approved plan for the reconstruction of the Worker's house building into the Cultural house. However, in following years, implementation of this plan was unsuccessful. Ownership of the building including the grounds was transferred from the town to the newly established branch office of Osvětová beseda (which was cultural organization) Klimkovice. The building remained more or less unused for several years. In the second half of the fifties of the 20th century, the situation changed due to the approval of reconstruction project. The building was supposed to be turned into panoramic cinema, primarily because the film production in the hall of a local Sokol Hall (the Světozor cinema, where movies were shown since 1924) was both technically and operationally very outdated. Local native Radim Ulmann, who also participated in the reconstruction designed new interior for the new cinema hall. Renovation and reconstruction of the building was completed in late 1958. Opening ceremonial of the new cinema named "Panorama", was held on 23rd December 1958. It was provided with modern cinema projection equipment called "widescreen projection" (besides Vesmír cinema in Ostrava, it was the only cinema with this type of equipment in Ostrava region).

- 14 March 1961: The building suffered largest damage ever. After a recent reconstruction of the building, there was a collapse of the outer wall on the north side of the building - in today's Palackého street. Repair was done very quickly - during the same year. However the first row of seats had to be removed from the auditorium of the cinema hall; it meant reducing the original designed capacity of cinema (only 18 rows remained). During the repairs, the part of stage behind projection screen was reconstructed as well.

- Year 1971: The new boiler room, with solid fuel boilers, was built together with the installation of central heating with pipes distributing the heat throughout the entire building. (In 2000, the boiler room was reconstructed and equipped with gas-burning boilers.) Investments needed for the reconstructions were provided by the town.

- In 1980, adjustments in the interior of the cinema hall were made by replacing acoustic panels and seats in the auditorium.

- In 1995, the roof of the building was repaired as well as the external facade. New advertising banner "KINO" ("CINEMA") was placed above the entrance facade. In the back of the building, ground floor rooms were modified and new independent access to WGC clubroom was added. Since 1994, the clubrooms (with its equipment) have been headquarters for the renewed WGC Klimkovice activities.

- In 2006, the building underwent complete reconstruction and modernization of its sanitary facilities.

Today, the functioning of the cinema and the entire building is ensured by the town of Klimkovice, which has the ownership of the building and its grounds since 1994, when the Unified Cultural Centers (UCC), which assumed the responsibility for organizing activities from Osvětová beseda, were dissolved. The building has, in addition to the cinema hall and other service and utilities rooms, also rooms in the basement, which are currently used for the work of local WGC Klimkovice. The Housekeeper's house is also located in the basement. Funding of this year-round operating building is provided entirely by the town of Klimkovice.

Typewritten notes from Adolf Výtisk, the former chronicler of Klimkovice

Compiled by: Ing. Jiří Pillich, the chronicler of Klimkovice